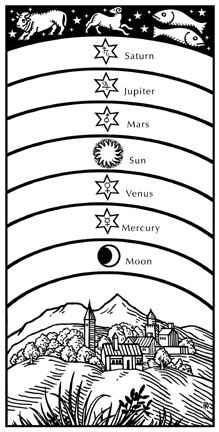 The seven planets of the old cosmology included the Sun (Sol) and the Moon (Luna), which we now don’t regard as planets at all.   The other five were Mercury, Venus, Mars, Jupiter, and Saturn.

This old, geocentric view of the cosmos was overturned by the Polish astronomer, Copernicus, in the sixteenth century.  He argued that, rather than Sol going round the Earth, as everyone had previously thought, it was actually the case that the Earth went round Sol.   His epoch-making work, On the Revolutions of the Heavenly Bodies (1543), ushered in modern astronomy and a ‘heliocentric’ (Sun-centred) understanding of the universe.   The Sun was now viewed not as a planet but as a star, the star of our Solar System.  The Moon also lost its status as a planet and was now viewed as a satellite of Planet Earth.  New planets were added to the list as astronomy advanced.  Uranus was discovered in 1781; Neptune in 1845; Pluto in 1930 (it was relegated to the category of ‘dwarf planet’ in 2006).

Although only five of the traditional seven planets are now viewed as planets, they still govern our lives in one sense at least.   Everyone in the English-speaking world refers to the planets all the time, because they give us the names of the days of the week. Saturday is named after Saturn; Sunday is named after Sol (the Sun); Monday is named after Luna (the Moon); and so on.

Find out more about each of the seven planets and how they used to be understood in pre-Copernican times: Luna, Mercury, Venus, Sol, Mars, Jupiter, Saturn.