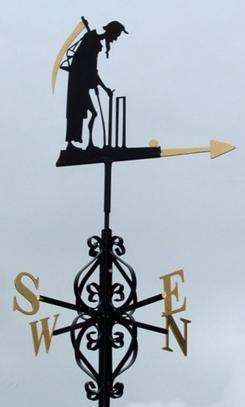 Saturn was known as Infortuna Majorto pre-Copernican astronomers.  He was the worst planet, the one whose influence could most easily go bad.  It was liable to cause sickness, old age, ugliness, disaster, melancholy, and death.  If received aright, however, this influence might bring about godly sorrow, penitential wisdom and contemplative insight.

The mythological character of Father Time, with his scythe and hour-glass, is based on earlier pictures of Saturn.

According to the ancient Greek writer, Hesiod, Saturn (or Cronos as he was known) consumes his children, only to disgorge them later.  Galileo, when he first saw round projections on either side of Saturn in July 1610, mistook them for a pair of close ‘companions’.  Two years later he was astonished to find that they had vanished.  He wondered if the planet, like its mythological counterpart, had devoured his own offspring.  It wasn’t known that these projections were actually part of a ring surrounding Saturn until the Dutch astronomer, Huygens, discovered it in 1655.

Dante in his Convivio connects the seven planets with the seven liberal arts; Saturn he connects with astronomy.  In the Bible, the prophet Amos speaks against his people for worshipping Saturn (Amos 5:26), instead of the God who made the Pleiades and Orion (Amos 5:8).