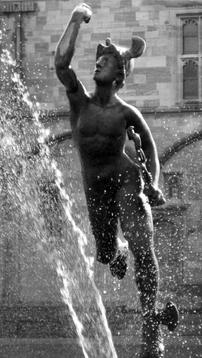 Mercury was known to be the fastest moving of the planets, according to pre-Copernican astronomers.  (We now know that he orbits the sun every 88 days, whereas Venus takes 225 days, Mars 687 days, Jupiter 12 years, Saturn 29 years.)  Partly because of this rapidity, Mercury became thought of as the messenger of the gods; he is often depicted with wings on his cap (the petasus) and on his heels.  He held a wand with which he directed pious souls to their happy dwellings in the after-life.  He was credited with inventing the flute.

Mercury’s lightness and quickness carry over to the metal with which he was associated.  Quicksilver will roll around a dish, dividing up into droplets and recombining very swiftly and glitteringly.  In Lewis’s poem, ‘The Planets’, he writes that Mercury brings about ‘meeting selves / Same but sundered’.

This tendency of Mercury to divide and reunite meant that he became connected to a variety of different things which split up and come back together.  He was the god of boxers, of thieves, and even of crossroads.  In Greek mythology Mercury was called Hermes, and in ancient Greece columnar pedestals carrying busts of Hermes (known as ‘herms’) were set up as boundary-markers or signposts at important junctions.  Another of his names was Hermes Propulaios, ‘Hermes Before-the-Gates’.  Yet another title was Hermes Kriophoros, ‘Hermes the Ram-bearer’.

As the messenger of the gods, Mercury was also thought to have a particular responsibility for speech.  Lewis’s poem, ‘The Planets’, calls him ‘lord of language’.  He was linked to scholarship and learning.  Mercury was thought to rule over the constellation of Gemini, the Twins, – Castor and Pollux, the horseman and the boxer.  St Paul’s ship in the Acts of the Apostles has these twin brothers as its figurehead (Acts 28:11).