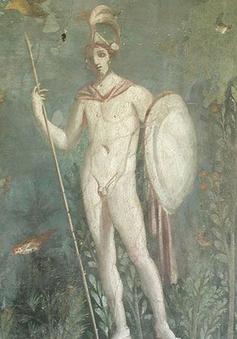 Mars was known as Infortuna Minor to pre-Copernican astronomers and was considered a ‘bad’ planet, not because his influences were bad in themselves, but because they could be put to bad use by people on Earth.

Famously, Mars was the god of war.  Martial influence, taken in the wrong way, makes warriors cruel and lawless.  Taken aright, it fortifies noble knights in justifiable conflicts and gives resolve to martyrs suffering persecution, making them as strong as iron.  Mars enables hard but necessary tasks to be accomplished.  He brings discipline, order, rhythm, and freedom from anxiety.

In an earlier mythological tradition, Mars was a vegetation deity, associated with burgeoning trees, woods, and forests.  The vernal month of March was named after him.  In this capacity, he was known as Mars Silvanus.

The Norse equivalent of Mars was the god Tyr or Tiw who put his hand in the wolf-mouth and after whom Tuesday is named.

In the New Testament, the Christian life is sometimes described by means of military metaphors, most notably in the description of the armour of God (Ephesians 6:11-17); it includes ‘the breastplate of righteousness,’ ‘the helmet of salvation,’ and ‘the shield of faith’.  The Greek version of Mars was Ares and it was on the Areopagus (the field of Ares, or ‘Mars Hill’) that St Paul gave his speech to the men of Athens about the unknown God (Acts 17).