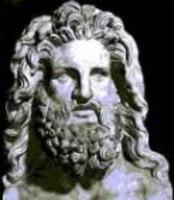 Jupiter was known as Fortuna Major to pre-Copernican astronomers.  He was the best planet, the sovereign of the seven heavens.  His kingliness was that of a king at peace, at leisure, enthroned, serene.  The Jovial influence made people cheerful and festive, yet tranquil and magnanimous.  Jupiter was thought to be a temperate planet, positioned as he was between the hotness of Mars and the coldness of Saturn.  He brought about halcyon days and prosperity.

His metal was tin, that shining metal which said different things to the imagination before the advent of the canning industry.  Cornwall and the Scilly Isles, on the west coast of England, being particularly rich in deposits of this metal, were known as ‘Tin Land’.  A tenth century Arabic manual of astrology makes Jupiter the ruler of the western countries and, for that reason, the patron of the Christians.

He represented joy, in particular that pleasure and heartsease which come in late spring and early summer when all vestiges of winter have finally vanished.  But his jocundity was hard-won.  Lewis associated Jupiter’s ‘Eye’ or Great Red Spot with sanguine humour and merriment, but also with blood and sacrifice, and in particular the sacrifice of Christ on Calvary.  The splendour of Jupiter was a tragic splendour.  He was associated with thrones, oaks, feasts, eagles, lions, blazing trumpets, fluttering banners, and crashing waves.

The name of the Old Testament character, Melchisedec, means ‘My king is Jupiter’.  He appears in the Book of Genesis as a priest-king and Lewis knew that, as such, he ‘resembles (in his peculiar way he is the only Old Testament character who resembles) Christ Himself’, a resemblance which is made explicit in the letter to the Hebrews (Hebrews 5:5-10). Melchisedec, like Christ, is especially associated with bread and wine (Genesis 14:18-20; Luke 22:19-20).